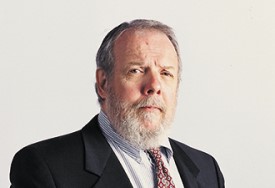 The David L. Lange Lecture in Intellectual Property was first held in 2017 in honor of Emeritus Professor David L. Lange. It is an annual lecture series devoted to increasing discussion about emerging issues in the area of intellectual property. Each year, the Lange Lecture brings a distinguished thinker, scholar or practitioner to Duke Law School to discuss issues related to intellectual property and innovation. This series continues the Meredith and Kip Frey Lecture in Intellectual Property, established in 2000 by Duke Law alumnus Kip Frey '85 and his wife, Meredith.

Each entry below includes a complete video recording of the lecture and, when possible, the full text of the published paper inspired by the presentation. The more recent lectures include the poster used to promote the event.

Before and After the Copyright Wars, Jessica Litman
October 4, 2018

Freedom in the Commons: Towards a Political Economy of Information, Yochai Benkler
March 26, 2002